A group of three small islands located at the mouth of Galway Bay in the Atlantic Ocean are known as the Aran Islands or “Oileah Arann” in Irish.  The largest of the three Islands is Inishmore followed by Inishmaan and then the smallest Inisheer.  The total area of land that constitutes these three Islands is a mere 18sq mi and they have a population of only 1,226 between them. Most of the locals speak Irish as their native tongue and are part of the Gaeltacht dialect.

A spider’s web of approximately 1,000 miles of ancient stone walls criss-crosses the three islands providing natural enclosures for the cattle and sheep that live on the Islands. The animals provide crucial leather to make shoes and wool to create hand woven skirts, shawls and knitted aran sweaters.  These traditional woollen garments can be purchased from a company such as https://www.shamrockgift.com/aran-sweaters . In the summer months, many foreign tourists and visitors descend on the Islands to photograph and witness for themselves the array of Iron and Bronze Age forts and other attractions that are located there. 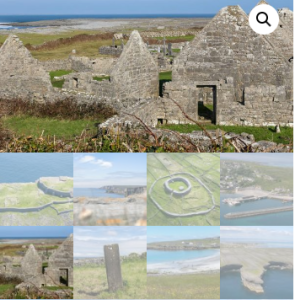 The lightweight boat crafted locally on the Islands is called a Currach, it is made with canvas pulled tightly across a skeleton of thin laths before being covered in tar. This design is particularly sturdy and made to withstand the incredibly rough seas. The brave fisherman that sailed these old craft wore soft moccasin shoes on their feet so as not to puncture the skin of their crafts.