Wide to super women even in the Marvel house: Brie Larson is the revised and corrected version of Captain America in a film that demonstrates the ability to make a virtue out of necessity, but with great humor. Captain Marvel’s review.

Even before starting, it already has a nice ballast to shake off this Captain Marvel, which more than a film looks like an obstacle course, a boundless temporal and spatial expanse to cover in the space of a single film, with a point of arrival already decided and expected, as well as a whole series of explanations of the case to be provided. Who is Captain Marvel? What has she done so far while the Earth suffered waves of more or less alien and more or less lethal threats? Do we really have to become attached to the nth figurine of a park of characters by now exterminated of the Marvel Cinematic Universe?

Call in extremis to put a patch to so many flaws and shortcomings of the MCU – first and foremost the shameful absence of a superhero with a franchise of her own – Captain Marvel takes full advantage of the proverbial enjoy ability and the notorious clockwork mechanisms of the increasingly complex “cinematographic superhero thing” “from Disney. While having to put up with a story of conventional origin, the film fits with enviable agility in the increasingly impressive unicum narrative made in Marvel, sometimes even managing to rewrite some events from scratch.

Where it should be a point of arrival of a series of narrations connecting to the expected Endgame, Captain Marvel knows how to propel the unexpected start of new chapters and characters (the Kree-Skrull wars explained well, he would say some newspaper). The origin story of her protagonist then succeeds in the uncomplicated feat of filling the gaps between a series of distinguished films of the first era of Marvel Studios with a rhythmic sequence of heavy taxes, when the great Avengers story was still to come.

Carried out to the sound of flashback the practices related to the presentation of the protagonist, the film soon manages to find a rather personal tone, a more adult, rough and adventurous pinch of the Marvel media. At least the wait was worth it: Brie Larson in fact gives us one of the best managed female characters in the challenging shoes of the absolute protagonist of her film. 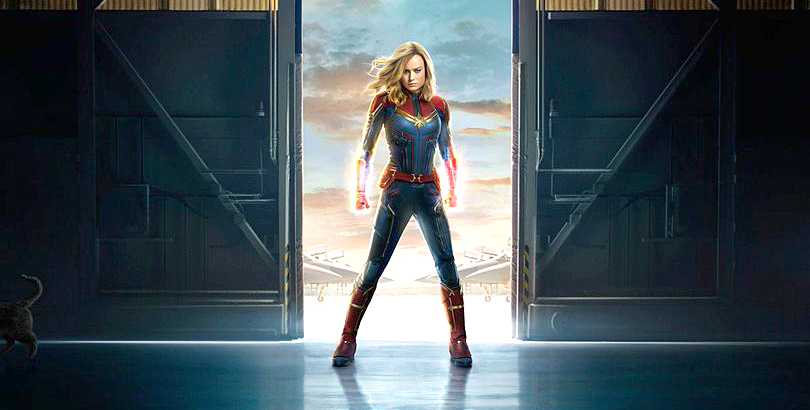 The obligatory comparison is that with Wonder Woman, blockbuster and champion of a cinema that finally looks at the other half of the superoistic sky, while in Marvel’s home the situation facing Captain Marvel can only remember that of Captain America; he too was forced to make his first appearance in a film dedicated to sprint, only to merge into the collective film of the Avengers. In both cases, the film brilliantly overcomes the comparison, confirming the fact that at Disney they have so well-oiled a narrative mechanism that has already been tested and bombproof, which allows the audience to have fun for a couple of hours, without ever having regret the ticket price.

You may also like to know is couchtuner safe

As for Captain America, here too we insist on the historical period of the events. The gallery of references, winks and details thrown in profusion here and there is very rich, for the benefit of those who were there in the 1990s. We laugh at the width of the road maps, the slowness of the Internet and the existence of the Blockbuster sales points, but they are passages that the film puts on autopilot, as well as the soundtrack: a list of songs so well known (so trivial?) that you come to sing them in the room, trying to see how they were chosen to quickly recall the memory of that era, in a systematic and somewhat superficial way.

Less mercenary but equally effective is the system chosen to tell the character’s personal experience with extreme rapidity. It begins in media res and on Hala, the technologically advanced planet of the Kree, dominated by the Supreme Intelligence, an AI that manages the public thing by conversing directly with its citizens. Here we find Jude Law in the role of the sarcastic mentor and Brie Larson in those of the impulsive student inclined to do his own thing, tormented by mysterious flashbacksof a past life. Via his teacher’s explanations and with the help of rapid flashes from his earthly past, the film succeeds in introducing us at the same time an alien planet, an intergalactic war and a human life perhaps not so rich in surprises to be able to sustain an entire film if his story happened in the right chronological order. 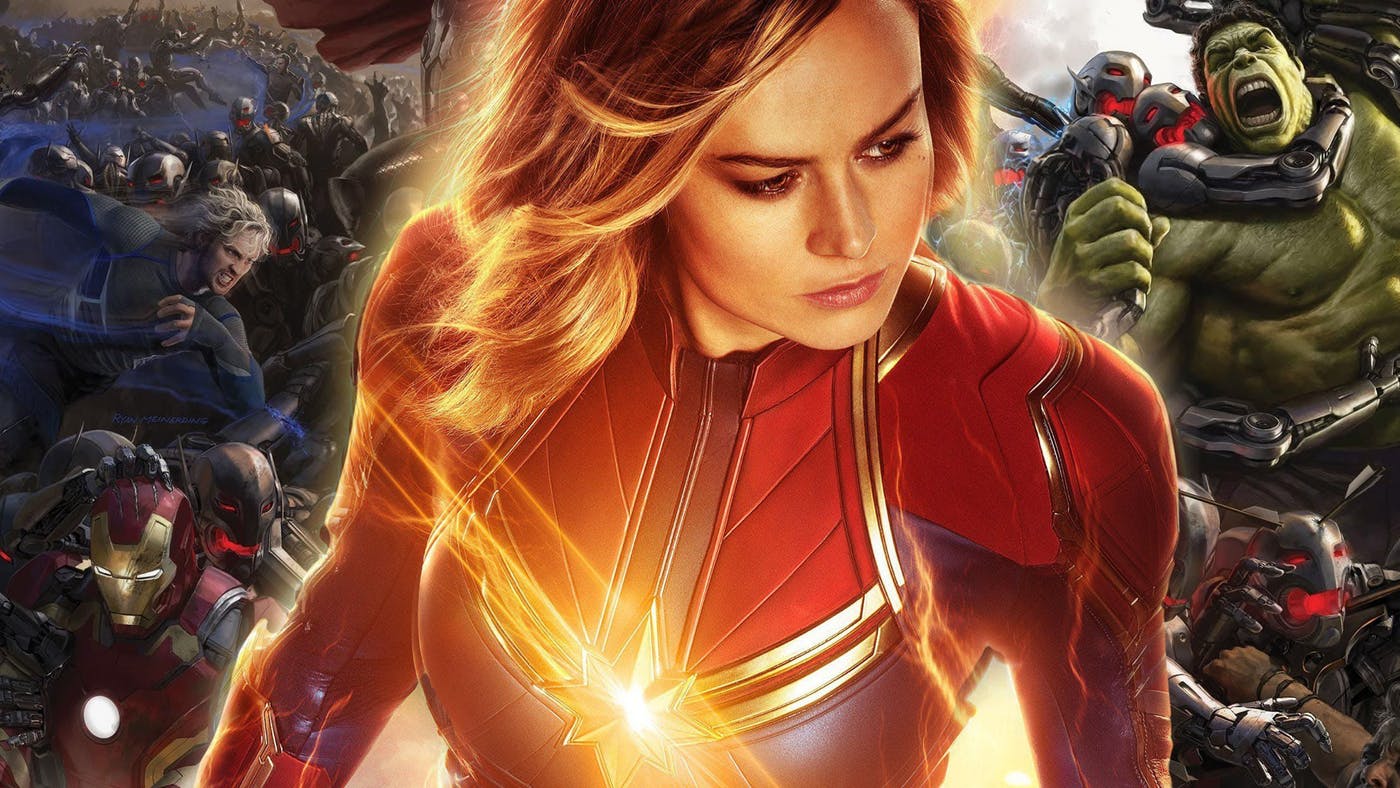 The secret weapon: The woman

To save Captain Marvel from its very conventionality there are three key elements: the Marvel experience, the acting skills of its protagonist and a direction able to combine stylistic references passed to an impressive use of the most advanced technologies. At 8 years of Captain America – the first avenger the producers and screenwriters know they have to churn out a well-rounded heroine who can run on her legs. Aided by the fact that compared to the recent past the MCU can afford to attract first-rate and proven quality actors, the creative team relies on a convincing Brie Larson a feminine character full of character, humor and with a hint of dramatic pathos. The woman protagonist of the film, human and heroic well before putting on the suit, is in effect a successful character, to whom it is easy to become attached.

Captain Marvel is the updated and refined version of Captain America: a heroine with immense power to make the difference is the human coefficient, which embarks on a daring journey (in the 90s) to find out who she really is, before fully expressing its potential. The film is very careful not to over-charge the character, in fact telling only the essentials of his past and limiting the whole heroine issue in a world of heroes to a couple of montages of great visual strength. A certain roughness of character in the interpreter and the support of the young Nick Fury do the rest.

Just the inclusion of a rejuvenated Samuel L. Jackson is the most impressive technological achievement of the film. It is not the first time that we are witnessing a “digital” rejuvenation of an actor in a Hollywood film but the duration of this aesthetic process (which in fact covers the whole film) and the realism obtained can only impress. When the special effects show the side, we think of the captivating humor of the characters and the brilliant introduction of the cat Goose (not only tender but full of narrative surprises) to unblock the situation.

In short, Captain Marvel is an excellent vision of entertainment, which knows in many situations to make a virtue out of necessity, finding in its close-knit cast and in its direction more careful than usual the strength to ennoble an introductory and connecting film, a sort of bridge narrative between the two most ambitious Avengers of all time. The true power of the character still remains largely to be exploited, but the potential is already clearly visible. Indeed, one can only regret how Brie Larson and his associates are immolated on the altar of the Avengers; with more time and freedom of movement available, Captain Marvel could have shined much more. There is however something to be satisfied with.