Bad habits are barriers to success, which is why they are to be ruthlessly eradicated. But the task is complicated by the fact that there are bad habits that we simply do not notice, and in the meantime they eat a fair amount of time and harm our reputation.

Overcoming them requires great self-control and self-control, but after all these excellent qualities are our helpers in achieving their professional goals, which means that they should be cultivated and developed in every way.

Including permanent work on yourself. These are the areas of application that will help develop positive qualities and at the same time defeat bad traits. 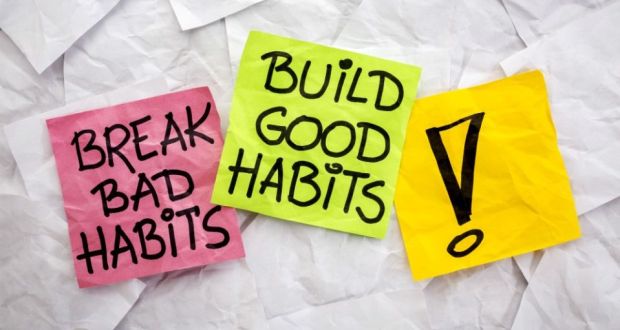 1. Refuse to use the gadget before bedtime

Going to bed in an embrace with a smartphone or tablet has become the norm in our day. However, most people do not even realize that the shortwave blue light from mobile devices significantly reduces the quality of sleep and the subsequent labor productivity.

Here is how it works. The morning sunlight contains a high concentration of this blue color. When it hits the retina, blue light stops the production of the sleep-causing hormone melatonin and makes you feel invigorated and concentrated. In the afternoon, the sun’s rays lose blue light, which gives a signal to the body to produce the sleep hormone – melatonin.

The natural rhythms of the body in the evening are tuned to sleep, but here we turn on our “blue screens” of gadgets and shine a blue wave light in our eyes. Melatonin production decreases, the process of falling asleep becomes long and painful for some, and anxiety arises there, they say, till the morning, turn a hand, and sleep still “not in one eye.” In general, the conclusion is one – no computers before bed! Especially in bed. Keep reading Smartphones drive the development of electronic commerce

Studies have shown that people who are in a state of “flow” are five times more productive than usual. This means that with full concentration in one case, you will make it much faster and more qualitatively than in multitasking mode. And scientists have calculated that it takes at least 15 minutes to concentrate again and return to the stream.

But imagine that you are distracted by the sound of a message that has come to your e-mail, the answer to your post on a social network, a new comment on a thematic forum on the Internet, etc. “I’ll check my social networks,” you decide and make a terrible mistake, because there’s another network behind one network, then an email, then a working chat, and so on. Now remember about 15 minutes, put all your “breaks” in and realize how much time you spend just to concentrate on one thing.

3. Check your phone during a call

No other trifle turns people away from you as much as constantly looking at the phone or checking SMS during a personal contact with a person. This creates an impression with the interlocutor that you are talking, she is boring, uninteresting or unimportant.

Email, calls, sms, social networks online may seem very important to you, but they are distracting. If you are waiting for something specific – this is one thing, but keeping messengers on and constantly listening to the sounds of incoming messages is not just a way to defocus attention and drop in productivity, but also a road to neurosis. Ask yourself a special time to check your messages, and turn off all instant sound alerts.

The inability to say “no” is one of the main self-organizing problems of our time. It is easier for many to agree than to refuse, and then engage for not being able to say “no” and wasting time on doing what was agreed. The ability to say “no” is a sign of high self-control. This is a pledge that you will not have to fulfill obligations that are unpleasant or burdensome for a business person. And sometimes simply impracticable. Sometimes it is better to refuse to do something at all than to take responsibility, and then do it badly, do not do it, or pass for a liar.

There are enough people in your circle worthy of attention. So why waste time and health on those unpleasant subjects that somehow annoy you? Learn not to do this, because it affects not only you, but also the people around you.

Never and no one can pay only half of their attention, especially during business meetings. If you think that the meeting is not worth the effort to concentrate, then you should not attend it, but if you have already arrived, then be kind enough to show respect for those present and set aside all current affairs for later.